Larry was the star yesterday. He whacked the weeds on the entire north trail (except the loop that goes down into the bog), a feat unsurpassed to my knowledge. The gulls are already nesting and a broken egg was found on the loop trail and a nest with an egg intact (I think) right next to the end of the north trail. Larry was so focused on cutting back the tall grass, that he didn’t even notice it. Of course we had to take T out to see the trail and the incredible job he did. 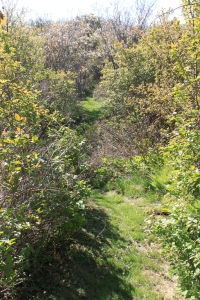 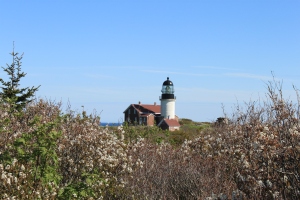 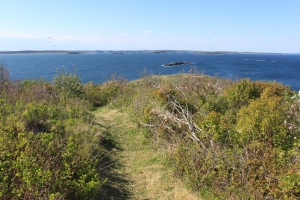 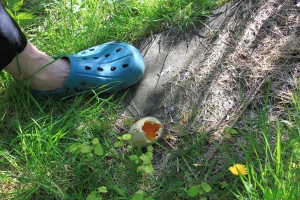 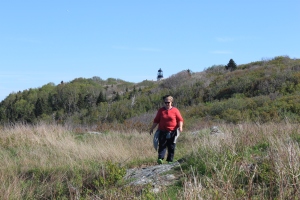 The fan to vent the outhouse in the cove didn’t come in time for Larry and T to pick it up at Shelter Institute on Wednesday so Cyndy and I took the old one that wasn’t working apart and squirted a little lube onto the fan and gave it a spin, as have two caretakers previously, and plugged it in again, and it came to life. The new one will be stored and used as a backup.

Coming back from the north trail, intending to start dinner, we heard a boat making chain type noises that didn’t sound like the lobster boats we’re used to hearing. A trip down to the cove found the Coast Guard moored to their big buoy. They waved when we got down onto the sand at the shore and put on their big megaphone to ask if we were okay and when I held up the walkie in one hand and a thumbs up on the other they wished us a good evening and signed off. Cyndy said sometimes they come into the cove for a rest for lunch while on maneuvers, but it was long past lunchtime.

Cyndy on The Hinckley 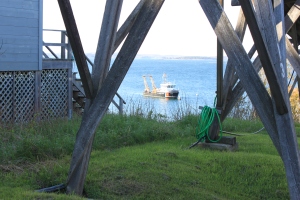 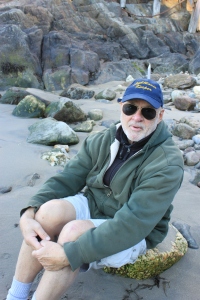 Dinner was a terrific shrimp stir-fry with green beans, broccoli and sausage over rice. And there were still some chocolate ship cookies left for desert.

There’s a stiff wind today out of the south and Ethan has texted to say it could last through the weekend. That could put a damper on the crowds we are preparing for. Cyndy and I are planning to come off the island on Monday but wouldn’t it be sad if we got stuck here for another day or two…