Posted on September 30, 2015 by seguincaretaker

Today was mostly foggy and the Marine Forecast looks progressively worse to the end of the week.  There is usually a crew that comes out on Wednesdays to get some of the bigger jobs done while the summer caretakers go to the mainland for supplies, but that isn’t going to happen this week.  Captain DeBery says there won’t be anyone out until at least Sunday and maybe not even then.  The seas are rough and most of the day saw a steady wind out of the south southwest.

It proved to be a good day to dig into some of the chores on our “to do” list inside.  So we headed down to the Whistle House where the fog horn had been blasting all night (we love the sound of that but it’s been worked on, is now a little louder than I remember it, and consequently, neither of us got much sleep) with Grady in toe.  For a little puppy he’s become pretty brave and adventurous, although he does spend a good part of the day snoozing.  I swear every time I turn around, he’s twice as big.  (His dad weighs in at 220 lbs.)

The Whistle House is our workshop and it’s incredible well equipped.  There is also a room inside that is maintained by the Coast Guard, which contains all of their monitoring equipment and electronics regarding the light at the top of the tower and the fog horn.  Needless to say, at the end of the summer, the workshop is in disarray and needs attention to put everything back in order, clean up, and throw away as much of the useless items as possible.  Getting trash off the island is no small chore.

After a couple of hours, order prevailed. 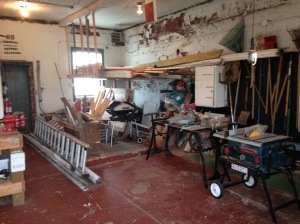 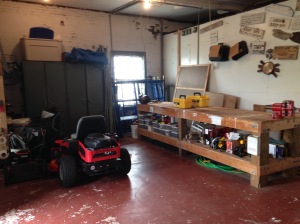 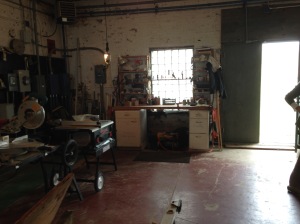 There was one Delmonico steak leftover and, sliced up, it made a great sandwich for lunch with a slice of raw onion on toasted deli rye.

We thought for sure we’d take naps in the afternoon but, forging ahead, the afternoon evaporated in tasks and it was tea time before we knew it.  Cyndy cleared out receipts from the gift shop and did a final tally.  We’ve left out benches on the lawn and signage on the trails for this week thinking there would be guests but now that the weather has changed, it doesn’t seem likely.  Starting next week we’ll pack up the items left in the gift shop for the trip to the Friends office in Bath and take down all of the items in the museum to store in bins in the closet.

Cyndy got out the hand clippers and we went to work trimming around the garden and along the sidewalk steps out front.  (Neither of us like to use the weed whacker much.)  We plan to turn the garden and have it all ready for May.  Being the last caretakers here for the season, closing down, we are at an advantage, as it will be the two of us, hopefully with the new caretakers for 2016, who will open up again the week before Memorial Day.  Instead of letting the new caretakers try to figure out the garden along with getting settled, we plan perhaps to pick up just a few starter plants in May like zucchini and cherry tomatoes, to get them inspired (or not).  This summer’s garden didn’t amount to much.  The September keepers even used it for composting egg shells and scraps. 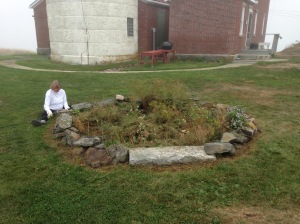 The composting toilet on our side of the split duplex caretakers’ quarters makes so much noise now with it’s venting system that, even with the door closed, it helped keep us awake along with the newly invigorated fog horn.  Candy made six trips to the workshop to find the right hex key to take apart the vent at the back, which in itself proved almost impossible.  We could only get the screws out at the top but it was enough to tilt it back and expose the exhaust fan.  A couple of squirts of lube made it purr like a kitten.  I spared you the photo but they are really a marvel.

It was Cyndy’s turn to cook; I became the sous chef and it was an all Rachel Ray evening consisting of jalapeño poppers and chicken breasts stuffed with Boursin cheese and wrapped with prosciutto (except we didn’t have any prosciutto so we made do with bacon) and steamed broccoli with parmesan and butter.

Sunset comes around 6:30 so we manage to have appetizers first and then dinner after.  Since the west was thick with clouds there was no sense hanging out at the sunset bench.  The only light spot in the sky was off to the south where there were a few breaks in the sky so we carried a blanket up to the highest rock to sit with Grady and watch dusk fall.  It was a view we don’t usually take in from that spot at that hour. 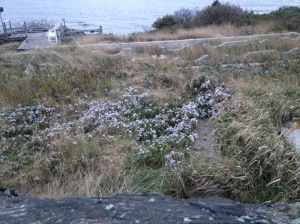 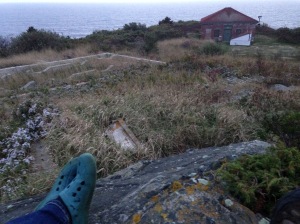 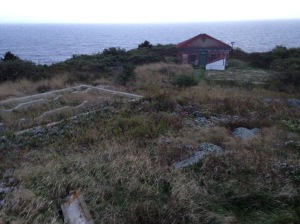 Dinner was divine followed by gin rummy (Cyndy killed) and Scrabble which I managed to win.  It was a long day and sleep came as my head hit the pillow. 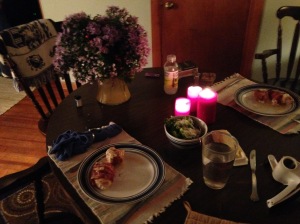