Raining Cats and Dogs – Hold onto your Hats!

Posted on October 1, 2015 by seguincaretaker

The title comes from our weather station.  It actually said that!  Today we saw sustained winds of 24 mph and by nightfall it was up to 28.  I saw that in New York City they are predicting 30 mph winds for Thursday so I guess Joaquin is heading in our direction.  Along with the wind came driving rains in quantities making up for lost time; it’s been so dry.  In Portland there were cars floating around in the streets.

Once again, indoor chores were the order of the day so we began by attacking all the bedroom closets and bureaus:  two on each side of the split duplex.  (Next door, above the museum and gift shop are guest quarters and another bathroom with a composting toilet.) There were sheets, blankets and towels all a jumble.  Going back and forth, this task took much longer than anticipated (three hours) but it was worth it.  We keep telling ourselves that we’ll be grateful when we’re back next May when we come to open up for the season.  I would have taken a photo but who wants to see that.  We’d left the window open in the bathroom next door and everything was soaked.  There were a lot of clean towels to hang on the line in our hall to dry.

We decided we should check on the dingy in the cove and it was a good thing we went down.  The Lighthouse Trail was a flowing river and the tide was unusually high with waves lapping into the dingy, which was already filled with rainwater (we had left the plug in).  So we managed to tilt it sideways to drain the water and then dragged it up as high as possible and re-secured it.

On the way up, we thought we’d inspect the South Trial as we hadn’t been out there yet and the wind was coming from that direction.  The beginning of the trail was not as clear as the North Trail and is in need of clipping some branches and whacking some weeds.  If we hadn’t been wearing heavy hooded rain gear, we could have suffered some bad pokes to the head.  Once we got out to where it is clear and the trail goes over a rock face, it was so wet and windy we decided it was not a good idea to go all the way out to the end on the rocks.  Back at the beginning of the trail and the vista that looks out at Cobblestone Beach, we sighted a pair of Great Blackback gulls.  They are the biggest gulls on the planet with a five foot wingspan and a body that is thirty inches head to tail.  Magnificent!  There were incredible swells and bright red leaves on some of the bushes I would love to have photographed, but the rain was so heave I didn’t want to take out my cellphone to capture them.  I’ll do it another day.

Once back in the house, we were both in need of a hot shower.  I went first while Cyndy tended to puppy Grady and just as I was all soaped up, the power went out.  It was 2:45 in the afternoon.  Then the water lost pressure and all I got from the shower head was spurts of air. 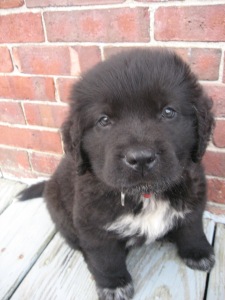 The auxiliary lights on the catwalk came on as they should and we settled into a game of rummy contemplating how long the food would keep in a fridge without power.  Just as we decided to call the Coast Guard, after confirming that the power was out in Phippsburg (a cable comes to us under the sea) the power came back on.  It was about 4:30.  The problem was that the light didn’t come back on in the tower.  Fortunately we remembered where there is a reset button.  During the winter if the same thing happens, it can stay out for months until the button is reset.  I’m surprised this hasn’t been updated yet to work remotely from the mainland but it hasn’t.

Not too many people have ever seen this vary familiar picture of the tower when there is no light.  Ordinarily this tower is on 24/7; it doesn’t blink and it doesn’t rotate.  Every light has it’s own signature and mariners of the past depended on the different signals to tell one from the other. 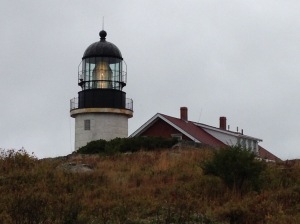 There was just enough filling left from the jalapeño poppers to spread on thick slices of tomato and top with parmesan, bread crumbs and olive oil to bake/broil for appetizers.

For dinner there was leftover venison and beef shepherd’s pie.  By the time we’d played some more rummy (Cyndy won all three tournaments) and a game of scrabble (me) we were so tired we hit the hay by 9:30.  Tomorrow is another day in paradise!