Posted on October 10, 2015 by seguincaretaker

I’m so glad we’re not leaving tomorrow!  Up before dawn, the sky was completely overcast except for a sliver on the ocean horizon to the east. 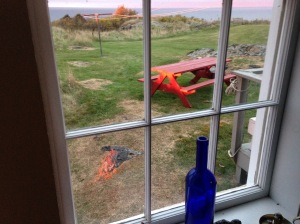 After a hearty breakfast we decided to get down to the cove and finish boarding up the windows to the Donkey Engine House.  It had started to sprinkle.  While we were there we put stabilizer in the gas and drained what was in the push mower. 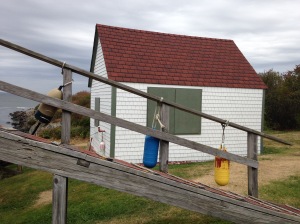 A final dust up in the outhouse put that in order before we lock it up and turn off the fan.

The cove was calm as the wind has shifted from the southeast.  By the time we got back up to the house and had put the tools away, white caps were heavy out to sea.  In no time, the winds were gusting up to 20 mph and it began to rain heavily.  We took the flag down. 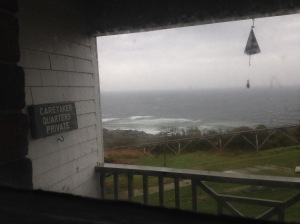 Cyndy had a call from a man from Westport Island who had seen a photo in the museum a while back about a shipwreck and wanted more information on that because it was his ancestor who was lost at sea.  She knew right where it was and called him back with the information.  He said he would make a generous donation to the Friends of Seguin Light Station in return, and just because he thought if was overdue anyway.

For lunch there was leftover shrimp and corn chowder with toasted olive and garlic bread.  I had to make a loaf of apple bread to use up what was on hand.  By the afternoon, we both took naps for the first time in two weeks.  It’s 74 and sunny in New York City but here on the island, 55 degrees and heavy rain falling.  The fog horn went on at 11:55 AM. 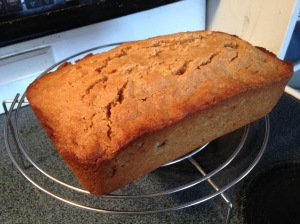 For dinner, Cyndy made eggplant parmesan.  We did really well making everything last until the last day, even given the bonus day we were awarded.  The only thing we ran out of  was eggs and water.  Thank goodness there is a supply of bottled water in the gift shop.  At a dollar a piece we’re really rationing it now.  No more cookies or pancakes but lots of great memories.  And Jackson left us lobster in the keeper box in the cove so we will be in heaven for our last meal on the island.  I hope they survived the rain.