The chicken was a hit and there was enough cobbler left for everyone.  We seem to be exhausted after meals together, generally turn in early and are awakened by the sun.  Whether that makes you get up then is another story usually determined by the weather,  and how many hands of rummy you’ve dealt the night before… 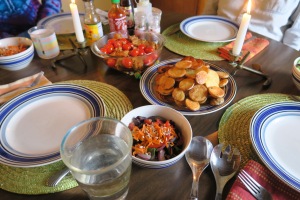 Even in the prep week leading up to the big opening of the island on Memorial Day weekend, we’re following the Wednesday routine:  the caretakers meet a 7 o’clock boat in the morning in the cove filled with volunteers from FOSILS called the Wednesday Warriors.  They come ashore to mostly tackle projects on a long list of maintenance determined by the expertise of the individuals and the funds available (please consider a donation) who in a pinch can also guide visitors to the island, while the caretakers take the boat back to Popham so that they can run their errands picking up supplies and turning in receipts.  It’s a good exchange that means folks can visit any time and find the gift shop and museum open and can climb to the top of the tower to see the light.  Basically the caretakers work 9 to 5 but often some visitors come in their own boats and sometimes even moor in the cove overnight, so can appear up top at almost any hour of the day, curious to see what’s there or just to take a hike and have a picnic.

There was a fellow I remember who would kayak over from Popham very early in the morning.  Once I found him before 6 with 7 quarts of blackberries heading down the hill to take home to his mother who made jam.  Don’t let the word get out on that one.

The warriors who came today numbered only three but accomplished a lot.  Even though Ken took a little dip in the sea getting out of the dingy, we were able to find him dry sweat pants to wear for the day while they were at work.  Cyndy made Julie’s coffee cake recipe while we operated the tram to send up doors and screens and windows for a project Rick is working on to put an outer door on the Gift Shop.  Julie did more work setting up the museum with Ken and all of us met to go over what has been accomplished so far on the master “to do” list and to prioritize what will come next.

Ken and Julie have determined where the blacksmith’s shop sat at the bottom of the tram and will go to work marking it with a plaque documenting the history. 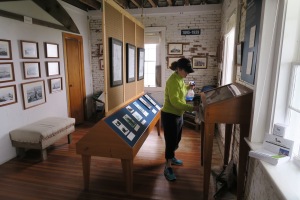 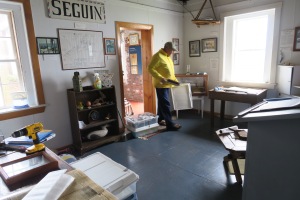 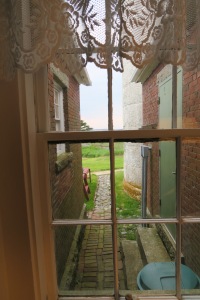 By mid afternoon the warriors had finished for the day and Mitchell and Patty returned from shore with supplies, one of which was a new flag purchased at the hardware store which we couldn’t wait to send up the pole.  It looked beautiful flying in the southerly stiff breeze. 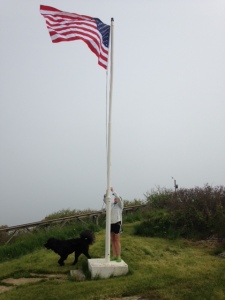 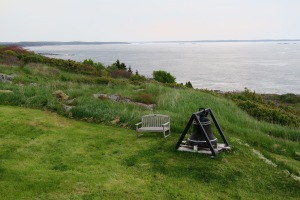 The fog had rolled in and mostly what we saw on the horizon instead of the sunset was rain. 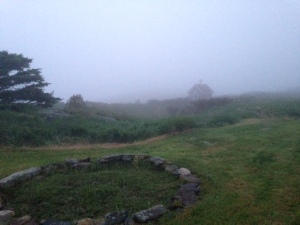 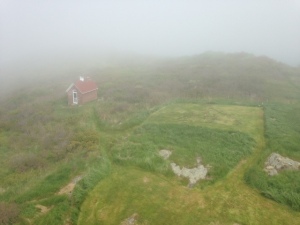 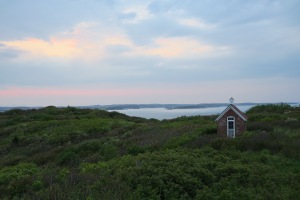 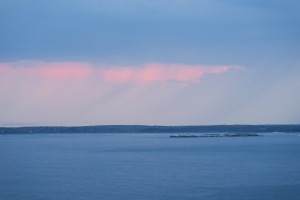 Mitchell and Patty folded the flag while Grady ate Cyndy’s arm up to her elbow.  Later we feasted on pot roast and gravy with spinach salad and once again were ready for an early to bed. 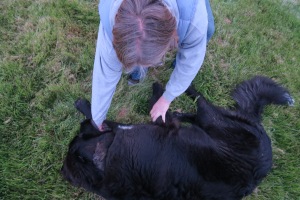 In the morning, Patty got on Gravely (new zero radius riding lawn mower) and found her true calling in life.  She made fast work of the third mow on the big lawn up top while Mitchell whacked weeds on the south trail (photos to follow on the next post), Cyndy busied herself cleaning the lens in the tower and I went to work with the push mower on the front lawn.  Lunch was on the fly, catch as catch can and by afternoon there was sun for a short respite of rest and warmth and raking. 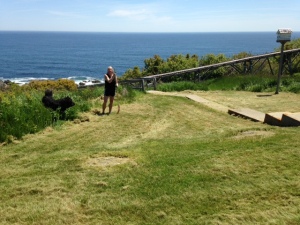 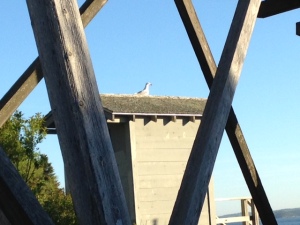 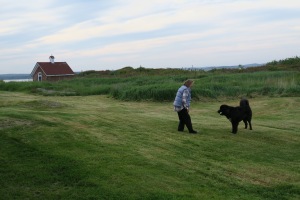 Before sunset, Mitchell and Patty took a cooler down to the cove, untied the dingy and rowed out to a keeper box lobsterman Jackson had tied to a mooring and retrieved the dozen lobster we had ordered the night before, eight of which we devoured shortly thereafter.

The dingy has a slow leak in one of it’s six sections.  That will be a chore to patch for a later day.  Meanwhile, it will have to be pumped periodically.

I wish I could have taken a photo of the lobster at the table but I was up to my elbows in butter and innards getting mine out of the shell.  All I did capture was Cyndy taking off the bands on the claws and throwing them into the steamy pot.  You’ll have to check out Mitchell’s blog on the Seguin web site for more.

A sailboat had a good afternoon with Monhegan Island on the horizon. 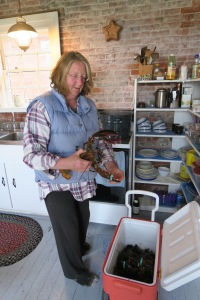 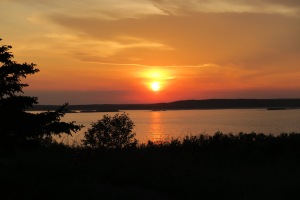