A Delayed Start to Closing the Island

Posted on October 4, 2016 by seguincaretaker 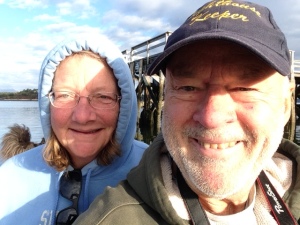 Cyndy and Grady and I finally got off at low tide Monday morning from Popham for the trip out to Seguin with Captain DeBery at the helm of The Guppy. It was daddy daycare day so young Larson made the trip in the boat bassinette. 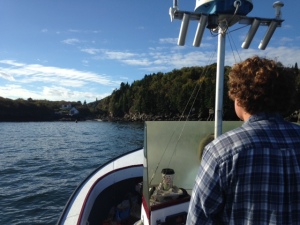 The island looked to be in great shape even though no one had been here for over a week. Tim and Lynn had left it all buttoned up for Ethan and Lindsay, but their week was cut short mostly by bad weather. The forecast looks great for this week but there could be a hurricane coming up after the weekend so we’re planning on coming off the island on Saturday. 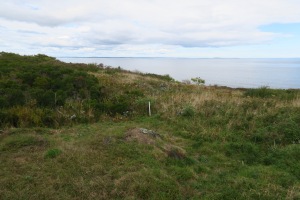 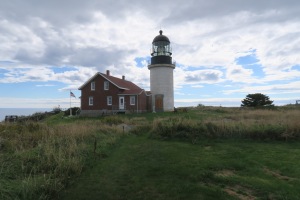 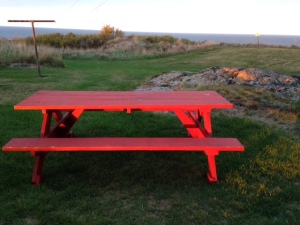 We dug into a few chores after hauling up our gear and putting stuff away. A part had to be installed in the public composting outhouse in the cove. There seems to be a short in the power source from the Whistle house down to the Engine house and the Boathouse, which meant that the fan to ventilate the Clivus hasn’t functioned all summer. A solar panel was installed on the roof and Lynn did the electrical work to the battery. Now she’s the sweet dream we always loved, with the most spectacular view from a throne you’ll ever experience.

A beautiful schooner sailed into the cove in the late afternoon, as the wind came up, and moored for the night. This morning, two of the crew came up to have a look around and were surprised to find Grady barking at them and the two of us enjoying blueberry muffins (just out of the oven) and a cup of coffee on the porch. They said they’d sailed by many times but never come ashore. I was glad to get a shot of their craft before they set sail although I wish I’d taken one yesterday when they sailed in and the sails were up. One had stayed down with the boat but the other fellow and his mother signed the guest book and had a look through the museum before we took them up to the top of the tower for an inspection of the 1st order Fresnel lens and the view from the catwalk of the highest (not the tallest) lighthouse in the state of Maine. 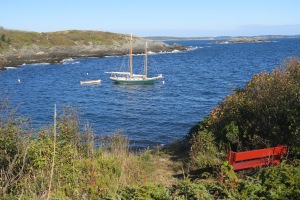 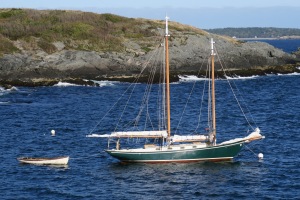 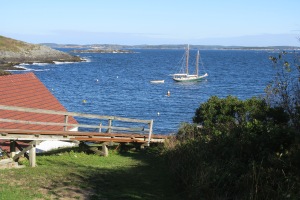 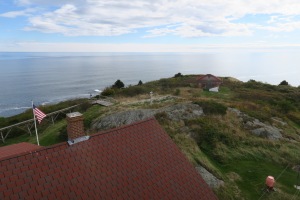 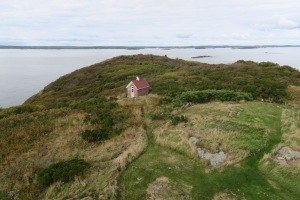 Today we tried to install a new fan in the composting toilet in the keeper quarters but it’s too close to the wall to get at a couple of screws so we’ll have to wait until Ken arrives tomorrow with the item he’s purchased at the hardware store that we hope will allow us to complete the installation. At this point they are not sure if the weather will permit the trip. Fingers crossed, otherwise we need to use the one next door in the guest quarters. Those things are a dream when properly ventilated. If not, well, you can just imagine. 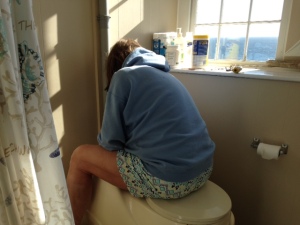 We came out with a menu for each night and enough to feed more than just the two of us. So we have leftovers for lunch.

Sunday when we couldn’t get out, Cyndy made shrimp tacos at home with corn and black beans.

Yesterday we made Ina Garten’s Coquille St. Jacques and had portions for dinner along with sautéed spinach. I got a C- for presentation but it all tasted great. We had another helping for lunch today and there’s enough for four in the freezer. 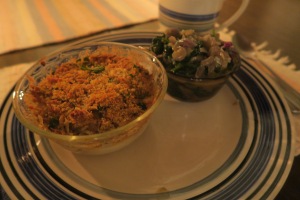 Today I spent a few hours in the kitchen while Cyndy packed up the gift shop. I got up early to make the muffins and later on put together Bon Appetit’s eggplant parmesan for dinner and cod cakes for tomorrow. 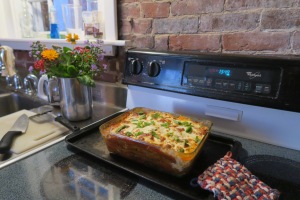 The day was windy but bright and sunny so we hiked the north trail in the afternoon and brought in all the signage for the winter. We were on a roll so we did the same for all the rest of the signage on the island. Then we brought most of the gift shop items down the tram hoping that Ken makes it out tomorrow and we can send it all back with him on the boat in the afternoon when he leaves. We’re not operating the tram these days, unfortunately, so everything goes up and down by hand. Cyndy and I were quite a pair with our little cart up on the tracks wheeling down the bins of tee shirts and memorabilia from the gift shop so they are ready to load tomorrow. Fingers crossed 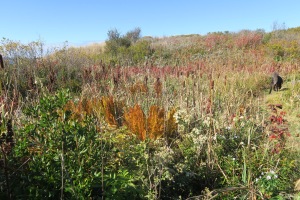 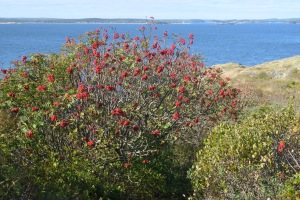 It was clear as a bell when the sun set and we sat down to a delicious meal, a game of cards and a good book. We’ll, I’m doing this, but the book will come later: To the Lighthouse by Virginia Wolfe. 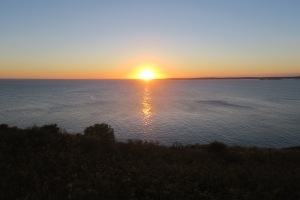 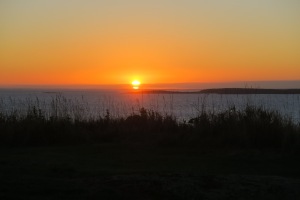