Another Season Draws to a Close

Posted on October 9, 2016 by seguincaretaker

Safely ashore, and having lost internet for the last few days on the island, I can now write about our final days finishing everything that needed to be done to secure the buildings on the island and the tower for the long winter ahead.

On Wednesday, Ken Young came out to help us pack up the museum and take all the items from the gift shop off the island.  We look forward to coffee and muffins with Ken because, as the island historian, he is full of stories of how the island came to be.  He has located the foundation for the original tower and marked it with a plaque as he has done with a barn, the assistant caretaker house, taken down by the coast guard in the 1960s, and recently the blacksmith’s shop near the donkey engine house in the cove. 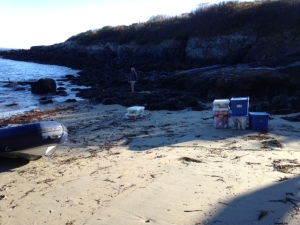 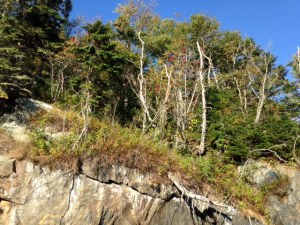 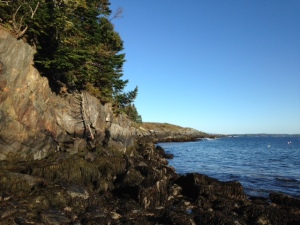 In the afternoon, as Ken was leaving with Captain DeBery in The Guppy, two boats appeared in the cove and four more visitors came ashore.

In the afternoon we stowed more things away including the charcoal grill and side tables built by Bo three summers ago and the new gas grill used by the overnight guests who stay in the guest quarters that was donated this summer.  There were guests on 12 occasions who stayed this summer.  To book the facility all it takes is a membership to FOSILS.

Dinner that night was probably the best meal we’ve ever prepared on the island, consisting of a butternut squash tart, cod cakes made with haddock instead of cod, and a side of sautéed sweet red peppers and onions for garnish.  And another sunset was not to be missed. 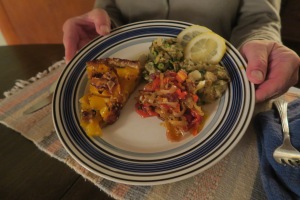 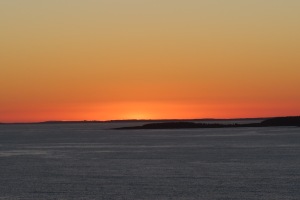 In the late evening, the slim crescent moon slipped down to the horizon just west of where the sun had set just hours before and turned a deep shade of orange.  Neither Cyndy nor I had ever seen that before.

Thursday began for us with another glorious sunrise.  The sky has been so clear all week that both sunrise and sunset day to day are fairly indistinguishable. 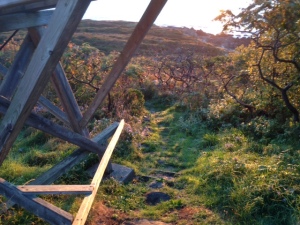 I wanted to bake a fresh peach cake and the bulb in the oven hadn’t been working so I decided that before I heated it up I’d replace it.  Fortunately there was an appliance light in the dresser in the dinning room.  After unscrewing the thick glass cover, an attempt to unscrew the dead bulb only brought a spark and the glass part.  The metal base remained screwed in.  Even with rubber handled needle nosed pliers, I wasn’t stupid enough to attempt this without unplugging the stove.  The plug was behind the stove on the floor and I was stupid enough to pull the whole oven away from the wall when I later realized that all I had to do was take out the bottom pan storage drawer.  We live and learn.  Once the faulty broken metal base was unscrewed with the pliers and the new bulb screwed in, plugging in the stove turned on the light (success!) but turning off the light switch on the stove wouldn’t turn it off (failure!).  After I shoved the stove back against the wall and propped it up on the wooden shims (all without waking Cyndy) the situation seemed to self correct and I could now turn the light on and off from the switch (ta da!).

Later in the morning we boarded up the windows to the donkey engine house at the base of the tram and disconnected the power to the fan in the public outhouse.  This summer the electricity down to the cove shorted out and power was lost in the donkey engine house, the boat house and the outhouse.  The outhouse was the big problem because unless you can vent that with the fan, it’s not very pleasant to use.  Daunted by the prospect of finding a short in a thick 180 foot cable (not possible), a solar panel was installed on the roof of the outhouse.  Thanks to Lynn’s electrical expertise in hooking up the battery to the panel, the fan kicked in and all was sweet once again.

After Cyndy put stabilizer in the gas and the mower in the donkey engine house and the deck furniture to the boat house was stored within, and the big doors to the ways locked up, everything down below was finished and secured for the winter.

We then progressed to take in the screen door to the oil house and board up the window to the door, which we double locked.

Cyndy cleaned out the guest toilet and put all the paint away that could freeze into the coast guard room in the whistle house.  This room is humming all year round with their instruments and the temperature is warmer than the rest of the building, so we store paint there.

All week we’d been planning for Ethan and Lindsay to come out for an overnight.  Their week on the island last week was cut short by bad weather so it was something they looked forward to as well.  They came out with their son Larson and dog Pepper.

We were too busy having fun and enjoying each other’s company to take photos at dinner.  Needless to say we had our fill with shrimp scampi for an appetizer with some crusty bread Cyndy baked earlier.  Next coarse was a salad of blanched chard chilled and served up with tomatoes, red onion and a honey mustard dressing.  Dinner of roasted chicken thighs over onions, garlic, thyme and lemon and leftover butternut squash tart followed.  For desert there was the fresh peach cake.  By the time dinner was over it was almost ten and we all drifted off to bed.

Friday brought the final chores before we could relax a little in the late afternoon sun.  Gates needed to be installed on all the windows downstairs.  Ken had helped us with some on Wednesday so Cyndy and I finished the rest today.  The windows on the gift shop door and to the front porch doors were also boarded up with plywood to protect them from the winter storms.  Finally we took in the screen door to the kitchen and boarded up that window with plywood and turned the picnic table on its side to keep the snow off.

Thanks to Patty and Mitchell, this years summer caretakers, there was a bounty to be harvested from the garden. 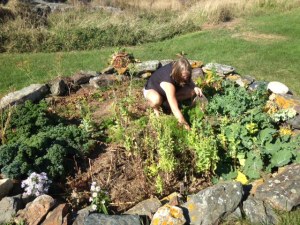 We roasted a few of the beets and made a wonderful salad with toasted walnuts, greens and a honey mustard vinaigrette to go with sausage and peppers.  There was even a little time to bake some chocolate chip cookies for desert and to share ashore.  Somehow they taste better when you know they were baked on Seguin. 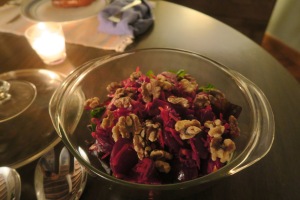 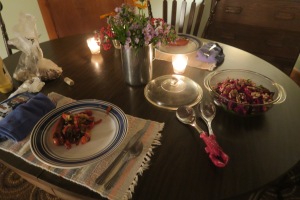 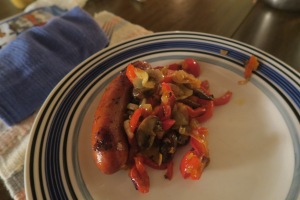 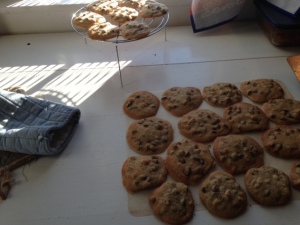 On the final day, we were up at sunrise once again as a crew comes early in the morning to help us off the island, which this year consisted of Ethan, Greg and Anne.  We’re all trying to learn all the steps Greg takes to shut down, for it is he who knows all the details of draining the water from all the pipes in the house and those that run down the tram to the cove among other things.  The hot water must be shut down and the tank that holds the grey water emptied.  Then each drain is flushed with the hose from the shop vac and after that a solution is added to the pipes that will preventing freezing.  Then finally the electricity is shut down on the entire island, except for the line that powers the 1000 watt bulb in the tower, of coarse, which is never turned off. 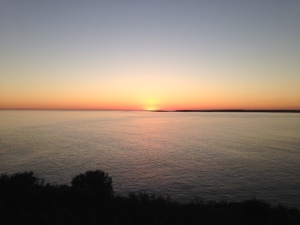 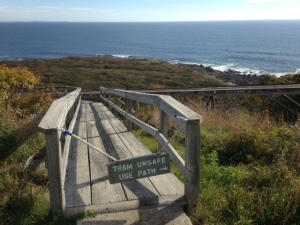 Some work has been done recently on nearby Pond Island.  The lighthouse there looks freshly painted and refurbished.  Leaving Seguin is always a bit sad.  Does it really exist when no one is there to see it?  We towed the Seguin dingy on a line from Ethan’s Guppy to store ashore for the winter and said farewell to the island in the distance.

Once ashore in Popham, we said our final farewells and divvied up the bounty from the garden.  There were beets, carrots and enough kale to fill a garbage bag, to be shared by all.  In just the short time we were away, the fall leaves have turned even more deep shades of red and orange and we are grateful for yet another time spent in paradise and look forward to next year and a new thrilling season with new caretakers and visitors who will marvel with us at the magic and wonder of this island paradise. 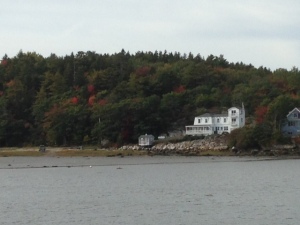 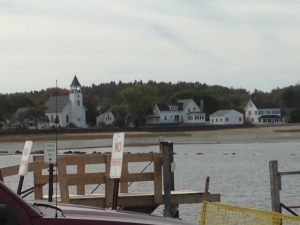 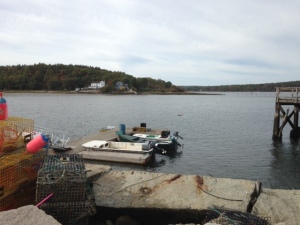