FALLING INTO WINTER ON SEGUIN ISLAND

Posted on October 2, 2018 by seguincaretaker

An early morning train to Boston followed by a crowded bus to Bath got me in on time mid afternoon. There were even a couple of dozen folks who couldn’t get on the bus (first come first served) and fortunately the train was on time so I got a good place in line. Cyndy was there to meet me and Sue got to the hotel just after I checked in. She was coming down from New Harbor and Monhegan Island where she’d been on vacation for a month. What a joy to have a night together. Cyndy joined us at Salt Pine Social for a memorable meal.

Starting your day at Winnegance Country Store for breakfast should be in the cards for everyone, at least once. It was warm enough to sit outside on the front porch in the sun. What a delight! It was there that we parted company with Sue, she headed back home to New Jersey by way of Sturbridge Village and Cyndy and I went off to the Bath Farmers Market for some last minute provisions before we met Captain DeBery in Popham for the boat ride to Seguin. There were lots of fresh and wonderful things to find including sweet corn, mushrooms, cabbage, carrots and heirloom tomatoes. And I found a beautiful wool hat that cost $40 (I forgot to pack my watchman’s cap)! But as a consolation, I can go on the Internet and see the little lamb, from which the wool was sheared. And the woman who sold it to me was knitting and she had knit the hat and everything else there was to see at her stand, had a big smile and was so pleasantly persuasive, I couldn’t resist. 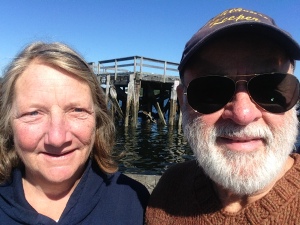 It was a rough sloppy ride in. The landing was the worst ever; everything got wet. Fortunately, Cyndy put my backpack in a garbage bag which saved my laptop and camera. Lynn said there was a dead seal on the beach. We could smell it but never found it. They really blend in with the rocks. And Ethan had cancelled his tour anticipating the rough landing. I can’t imagine how visitors would have handled getting out of Ethan’s lobster boat (The Grasshopper), into the dingy and onto the shore with the waves crashing and water spilling over the bow onto them and all of our stuff. We were counting on help to carry up our stuff but after crossing paths with Tim and Lynn who were coming off after two weeks on the island with just a couple of trips getting them and their stuff onto The Grasshopper and us and all of our supplies and luggage off the boat, we were very much alone. 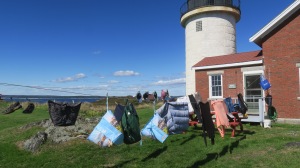 After we put away (dried out) the groceries and hung up our duds to dry on the line, we spent the rest of the day under the kitchen sink. Short breaks were taken to run up and down the basement stairs; shutting off, then turning on more times than I could count to test out first a likely fix, which had involved a part that had to be ordered so that all Lynn could do was prep it and leave detailed instructions before we arrived for installation. After a very long time spent with meticulous installation of the part below the hot water faucet under the sink; long story short, that wasn’t the problem (see photo). There is a tiny leak in the little horizontal pipe that connects the hot faucet to the central arm, just before it gets there. Let’s not talk about our feeble attempts to solder the leak (after spending an inordinate amount of time in the Whistle House tracking down the solder gun and supplies). Of course you first have to shut off the water. I should do a video of the basement with the dirt floor and multiple places you can easily whack your head, littered with relics of heating systems of yore.   And it wasn’t until the next day that it finally dawned on me that the leak probably came from water freezing in the pipe over the winter. It’s a thin pipe and runs horizontally. I think we need to find a new fixture with solid connections or at least some way to blow out what’s there when we drain it next weekend.

The monarch butterflies are everywhere on the island. Without Fat Albert (the squat pine tree that blew over last winter) we wondered where they spent the night.

For dinner there was spinach pie appetizer triangles and seared scallops with sautéed crimmini mushrooms.

Our Scrabble game at 260 to 261 reversed itself with the point added and subtracted respectively when I went out first to allow me to win the game by one point after Cyndy had finished ahead of me by one point!

I cooked up some steel-cut oatmeal for breakfast and for lunch, made up an egg salad from the two boiled eggs leftover from my trip, on toasted English muffins.

And dinner consisted of fresh haddock baked with butter and corn fritters and fresh broccoli from the broccoli left in the island garden. 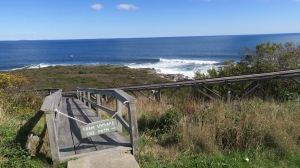 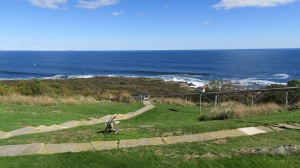 Even though I protested working on a Sunday, we did accomplish a few chores:

Weeded the stone path to the back of tower and weeded and turned most of the garden. 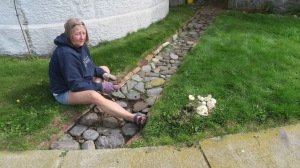 There seem to be an abundance of mushrooms this year all over the lawn.  I gathered some up.  We didn’t eat them. 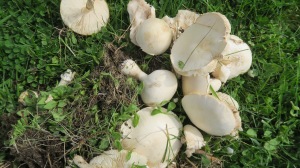 Put away BBQ stuff in the bottom of the tower.

Boarded up Donkey Engine House. Cranked up the engine and let it run for a while.

Fixed the Oars, or didn’t fix the oars. New buttons with springs had been purchased to go inside at the break where they would match up with the holes of the other half but the holes were corroded and when I aligned them (fortunately facing away from me) the little metal button popped out through the hole and sprang several feet away into the grass. We spent a long time on our hands and knees looking for it until we gave up thinking the $1.99 purchase wasn’t worth the effort and a washer at the hole wouldn’t help because there was no room for it when the oar halves were slid together. 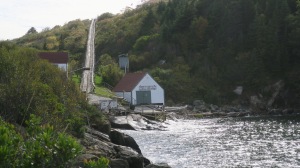 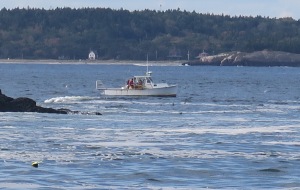 Drizzle and rain. We kept the fog signal going. I made heirloom tomato pie while Cyndy packed up the gift shop. It’s a very involved recipe but so worth it. There is cornmeal and Manchego cheese in the crust and a layer of more Manchego, mozzarella and Parmesan and sautéed onions under the sliced heirloom tomatoes. It was so good we each had two pieces for lunch.

For dinner we had more pie along with chicken fricassee but we’d been snacking all afternoon. The evening ended with gin rummy and bed. 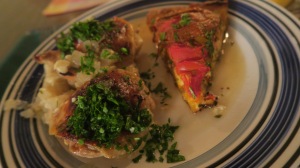 Today it’s raining harder and the seas are still rough. We don’t expect to see anyone. Cyndy helped me get a beautiful four-pound roast into the slow cooker with carrots, celery onion and red wine which then called for a huge breakfast of eggs and bacon and leftover corn fritters and some really good bread T’Ann’s cousin Ray left for us in the freezer. That’s what we need on this island: a professional baker.

On my morning walk to the cove there was a gull hanging out under the tram that didn’t fly away when I got close.  I hope she’s all right.

Now we’re digging into some more indoor chores so while Cyndy packs up the museum, I repaired one of the chairs there which had a leg split off, with some very stiff and dried up wood glue. Hopefully I got enough on, together with the help of a couple of rubber bands while it dries, to hold it together. I’m glad I have this blog to work on so I don’t have to do what she has headed upstairs in the guest quarters to do: clean out the composting toilet! Next will put away some linens that we found still in the contractor bags they were brought out in. But first, let me try to get an Internet connection with the help of the hotspot on my iPhone so that I can post this and the photos I’ve taken so far. Tomorrow, if the weather and seas cooperate, the Wednesday Warriors would come out to do bigger chores, but we don’t expect that will happen.  The wind same up to sustained 20 – 25 mph in the afternoon.

The roast was delicious and will probably be even better as leftovers.

A new day brings the same choppy seas we’ve had for the past few days.  Ethan says there’s a hurricane just sitting off the coast not moving and it could be this way until Sunday. 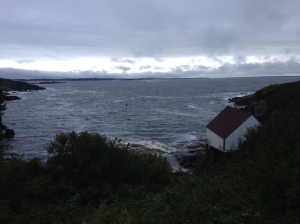 Fortified for the morning, the rain has stopped and the sun is trying unsuccessfully to peep through somewhere in the overcast sky.  We’re going to get out the screens and begin boarding up the windows with the gates.  What fun!

2 Responses to FALLING INTO WINTER ON SEGUIN ISLAND