Posted on October 6, 2015 by seguincaretaker

We rested for part of Sunday; the sun rose at 6:40 and there was a pile of suds in the cove and more washing ashore. 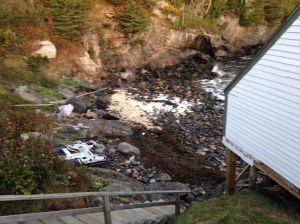 The day started with Cyndy at the stove making coffee cake, which we’re still feasting on. We then went to work sweeping and vacuuming the tower. 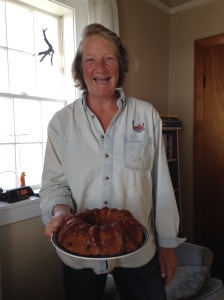 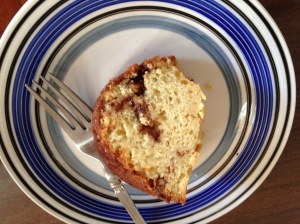 The sun set taking with it a yellow brick road across the sea. 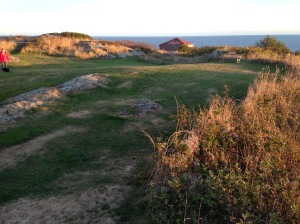 Today the weather was clear and sunny so we wanted to be doing chores and projects outside. We stored a bench in the Oil House along with some signage, took off the screen door and put it inside and screwed on the plywood cover over the window in the door to protect it in the winter. 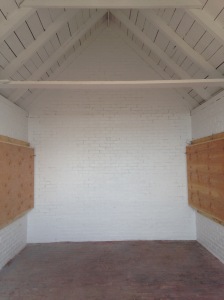 Bunks have been installed to accommodate any workmen who come out who need more than one day for whatever project they are taking on.  The loft that had been there has been removed.

There was a coffee break during which time I reincarnated the cinnamon raisin loaf I’d baked that never rose and came out like a brick, into bread pudding.

Finally we got down to some of the projects we’d saved for our last work week here on the island and decided that Cyndy’s dream of priming the landings in the tower with rust-proofing would finally come true. 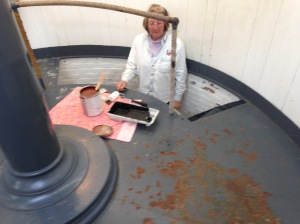 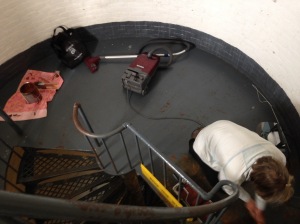 The tower and the split duplex caretaker quarters were built in 1857. There are taller lighthouses in Maine but none that are shining a light higher than the one here on Seguin. Because it’s built on a hill that is 153 feet above sea level, the tower didn’t need to be that tall; there are only 48 steps and the light shines 24/7 not blinking or rotating at 183 feet above sea level. The job we’d set out for ourselves was to put down a primer rust-proofing coat on the two landings inside. The entire inside of the tower needs to be painted but because we’d planned a limited part of that, it was doable; the middle landing still had to be scraped. There was much satisfaction to be felt once the job was done. 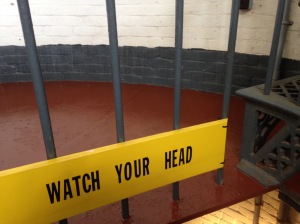 The bread pudding was just coming out of the oven at lunchtime and we salvaged some bread going moldy in the fridge for grilled ham and cheese.

Cyndy cleared the holes marking the original tower on the lawn so we’d find them again next spring. That tower was built in 1795, commissioned by George Washington, was octagonal, and was made of wood. Ken Young had found the exact location of the foundation and set out to mark it with eight discs of marble the size of hockey pucks put in place just below the surface of the lawn so the mower would go over them, a couple of years ago. For a time we lost sight of them because the grass grew in, so every year we need to expose them again. You should have seen Cyndy and Ken and me with tape measure and string trying to find them last year!

In the afternoon Cyndy packed up everything in the gift shop, per Nat’s instructions, with a little help from me. It all fit into three bins, which we’re hoping Ethan will take off the island tomorrow when he comes at noon with some guys who want to surf off the cove. The swells out of the east are amazing!

Now that the wind has died down the biting flies and mosquitoes are back.  Even inside, reading an e-mail from my friend Rick, one landed right on my screen in the living room!  It’s almost impossible to go out at dusk without repellant.

While Cyndy was digging holes, I prepped dinner. On Sunday we tried a new recipe for Apple Cider Chicken made with thighs, onions, granny smith apples and bacon, which we served up with roasted acorn squash stuffed with the last of the creamed spinach. That photo came out blurry but today for dinner the last two thighs were reheated and served up with corn and jalapeno fritters.

The sunset was one of the most magnificent we’d ever seen here and it seemed to last forever. 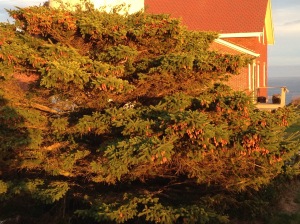 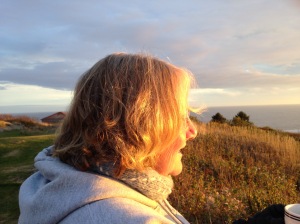 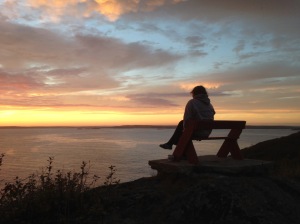 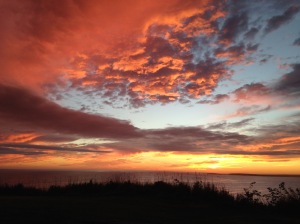 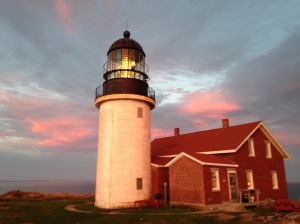