Posted on October 7, 2015 by seguincaretaker

It’s a beautiful clear sunny day without a cloud in the sky.  The wind is still coming from the north so the cove is a mess. 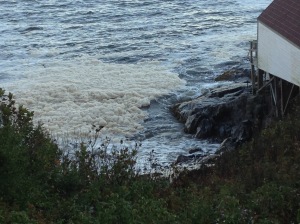 Captain DeBery informed us that he may come out between 12 and 1 with a few buddies who want to surf.  The video clip doesn’t really do it justice but the swells are huge and I can see why they thought it might be fun.  However, by the time they got here after 2, they’d decided the waves weren’t “pretty” enough so they hung out on the boat instead.  At least we were able to pick up the laundry bag with down jacket and vest that Cyndy had left behind when we came out.  This was the first time we’ve had a boat in the cove in ten days.  And as far as I was concerned, the cove was still too rough with the north wind blowing swells directly in, it was not advisable to take the dingy out to meet them.  But Cyndy was determined to get her puffy warm clean cloths and headed out in her bathing suit with a push from me.  I know better than to have my camera or glasses with me after capsizing just that way last May so I didn’t get a photo, but she managed to retrieve her laundry without swamping the boat. 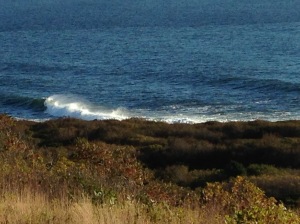 In anticipation of Ethan’s arrival, we brought down empty gas and water cans, dirty laundry, garbage, and three bins filled with gift shop items hoping Ethan could take them off the island for us, but it was too rough and we had to prioritize.  There is a work party coming out on Thursday (the Wednesday Warriors) so we can hopefully send them back with them. 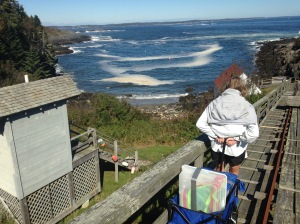 To kill time, Cyndy went up to the house and turned on the water so we could hose down the outhouse down below.  It’s now spic and span inside and ready for visitors next summer.  I spared you the photo.

We’ve seen a few monarch butterflies on the island but nothing will top the miracle we witnesses September 19, 2012 late in the afternoon.  We noticed them streaming toward Fat Albert (the squat evergreen near the sunset bench).  At closer examination, we saw each had found a spot on a limb and had settled in for the night folding in their wings.  In the morning, they left one at a time the same way they arrived and went on their way, to Mexico, we were led to believe.  Here’s a clip from that fall:

The summer caretakers (Larry and T’Ann) left us some nice chunks of beef in the freezer so I put them into the slow cooker in the morning with some carrots, onions, celery and a box of green beans we found in the freezer as well, ready after 9 hours on low for our evening meal.  There will be enough for leftovers for lunch tomorrow.  And we came up with a plan for the day tomorrow since the regular work party had to delay their arrival until Thursday.  I won’t mention it yet in case we find we can’t pull it off, but we’re really excited.